The keynote speaker will be Dr. Kevin Mannoia, who has served as chaplain at Azusa Pacific University since 2005. Prior that that, he was dean of APU’s School of Theology and served as president of the National Association of Evangelicals. He is an ordained minister and the author of numerous books.

The commencement ceremony is scheduled to be live-streamed (check simpsonu.edu for a link). The ticketed event is “sold out.”

It will be the second commencement ceremony for new Simpson University President Norman Hall, who joined the university in June. The university received full accreditation renewal with no sanctions in March and has announced new athletic and academic programs, as well as new scholarships.

The 2019 spring graduates include students from the School of Traditional Undergraduate Studies, School of Adult and Graduate Professional Studies, Betty M. Dean School of Nursing, A.W. Tozer Theological Seminary, and the School of Education.

Simpson traditionally holds graduation twice a year — in January for summer and fall grads, and in April for spring graduates. The April ceremony is typically held outdoors but is being moved inside this year due to unsettled weather predictions and field conditions. 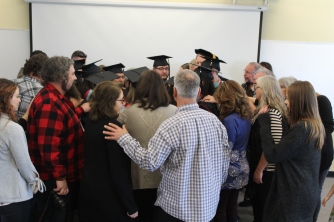 Simpson University was founded in Seattle, Wash., in 1921, and moved to Redding in 1989. In addition to offering 24 four-year bachelor’s degrees in its traditional program, Simpson has also helped almost 4,000 North State residents complete their degrees through the School of Adult Studies (ASPIRE) program, which offers classes online and on campus. The School of Education, which offers master’s degrees and credentialing programs, has graduated nearly 3,000 students, many of whom teach or serve as administrators in Northern California.

The Betty M. Dean School of Nursing, which is nationally accredited by the Commission on Collegiate Nursing Education, is ranked No. 12 in Best RN Programs in California, based on test scores. It has graduated nearly 200 four-year nursing students and more than 175 RN-BSN students.

Simpson is launching a new commercial music emphasis in the fall, as well as athletics programs in track and field, swimming and diving, men’s volleyball, women’s wrestling, and bass fishing. Initiatives are also underway to add a digital media concentration and 3+2 engineering program.

Other programs in the works include social work and kinesiology, as well as exploring delivery of the university’s Master of Arts in Counseling Psychology program in partnership with the Hong Kong Institute of Christian Counselors. The university is also partnering with Bethel School of Technology to offer degrees to students enrolled in the coding “boot camp.”

In January, Simpson announced a Carr & Camp Fire Scholarship for families impacted by either historic blaze. Each recipient who meets minimum qualifications can receive up to $60,000 over four years. The university is also starting similarly “aggressive” scholarships geared toward teachers, students in Northern California counties, Christian and Missionary Alliance students, and more, Dr. Hall said.

One thought on “Simpson University Prepares to Honor 130 Graduates”